I always cycled as a kid, as it was the only way to get around before I had access to a car. That stopped after I left university until I bought a bike to cycle round the canal towpaths in Birmingham where I was working. Eventually in 1999 I rode down to London on the canal towpath. I wouldn't recommend it, it's rather bumpy!

But it did give me a taste for cycling and I decided to commute to work in London - more because it was actually quicker and more reliable than getting a bus and tube.

So when a colleague at Channel 4 set off on a round Britain ride, it started me thinking about cycling from Land's End to John O'Groats - one of those classic routes you hear about people doing for charity.

After quizzing my friend on his tips, buying a book with routes and tips, and poring over maps of Britain, I decided to take the plunge.

The world record for the route (which comes in at around 950 miles, depending on which way you go) is under 2 days. For goodness sake, the record on a Penny Farthing is 5 days and 10 hours!

I won't be challenging that - my route will take 14 days, averaging around 70 miles per day. I didn't initially have the idea of doing the ride for charity, but my wife Clare persuaded me that I should use the opportunity to raise some money, so I'm doing the ride for Multiple Sclerosis and Motor Neurone Disease.

It's all new to me, so will have to see how it turns out. Here's the rough route... 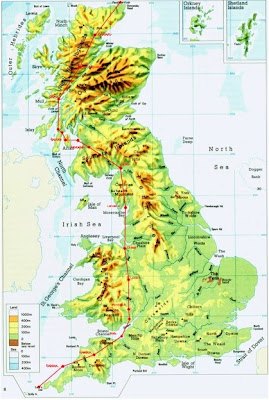