Overcast as I set off in the morning and soon reach the Scottish border - the famous Gretna Green where everyone used to run away to get married, I think it was something to do with parental consent not being required in Scotland. 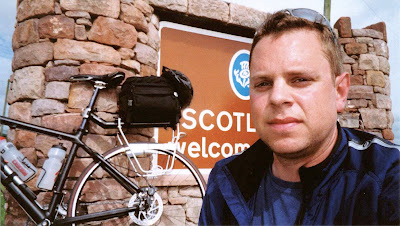 Cheer up, you're in Scotland...

Then turn west towards Dumfries and into the wind, although the sun comes out. Reach Dumfries in time for lunch (a pie from Greggs to celebrate being in the land of deep-fried food). Is there any difference being north of the border? I'm not sure there is really...

Returning to my northerly route, and with the wind behind me again, my bike computer conks out and my knee begins to twinge. I also meet a chap, who I would guess is in his seventies, walking from Land's End to John O'Groats. He's doing 25 miles per day, which is pretty fair going at any age - but it's going to take him 6 weeks.

I've done most of my riding before lunch again, so there's only 25 miles to go to Sanquhar, and it feels as if I'm being pushed along it's so easy. There are a few spots of rain, but consider myself lucky as the forecast said it would pour today. 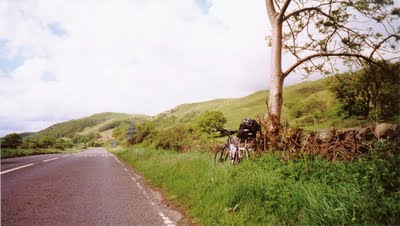 Reach the pretty village of Sanquhar, but I'm more interested in getting some liquid refreshment and find a tiny pub in which I don't understand a word anyone is saying.

Then another few hundred yards to my hotel, where I've been given an enormous room. Stayed up late chatting in the bar to a bloke called Mark from Devon who is in the area for the fishing.