I'd imagined cycling in France would be a far more enjoyable experience than in England, with courteous motorists waving to me as I passed. And that's exactly how it seems to be.

It's a blue-skied, but fresh Sunday morning and I head down to the sea front by the lighthouse to scoff my croissant and pain au chocolat (what the hell!): 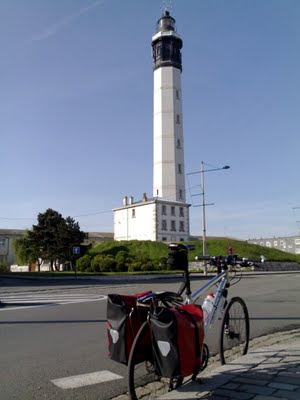 Starting off in Calais

And it's lovely to see the Sunday cyclists out on their shiny road bikes, all wearing pristine team replica kit. But there's a bracing wind blowing right into my face that is going to take the edge off the enjoyment today.

Out of Calais I pass through Sangatte, site of the infamous camp where refugees/illegal immigrants try to leap onto lorries to get to Britain. Can't imagine why!

This is the Pas de Calais, the narrowest stretch of the Channel and the one the Germans assumed the Allies would attack across - so it's littered with reminders of WW2, including this old emplacement, which has now become a museum: 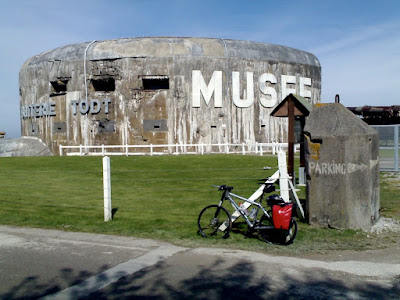 Stop by the harbour in Boulogne for a massive chunk of bread and some smelly sausage. The route is pretty flat and hugs the coast, which looks delightful. But this countryside was also the scene of horrible carnage 90 years ago - it's the famous Somme.

After passing through holiday resorts and past beaches I came to the cemetery at Etaples (which the English-speaking troops, predictably, called 'Eat-Apples'). It was some way behind the front line and where the troops arrived and the wounded were treated - over 11,000 are buried here in a cemetery designed by Edward Lutyens. As usual it is beautifully kept and peaceful - hard to imagine the battles that led to so many dead... 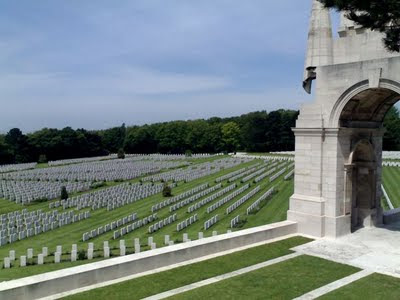 Having had an early lunch the afternoon seemed to stretch on forever and I stopped in a Tabac full of rowdy locals in a tiny village to use the loo and grab something to eat and drink.

I eventually arrived in Pois-de-Picardie, a small town in the middle of nowhere, at 9.00pm to find that not only was the little brasserie where I thought I had a room booked shut, but so was the rest of the town (Sundays in France being something we haven’t had in England since the 1970s). The owner of the brasseries that was shutting up shrugged his shoulders in the classic French 'Bof' ('like I care') manner. I've got nowhere to stay, and nothing to eat or drink!

Thankfully my wife is able to track down a hotel in the nearest town of Amiens. It's another 15 miles, and I manage to get water from an elderly frenchman by knocking on his door.

But once I know where I'm going it's not too bad, and I have the rather lovely treat of having owls fly in the fields alongside me as I ride through the pitch black countryside. Good job I brought my lights!

Arrived in only a mild state of total exhaustion at 11.00pm to find, again, that the only food available is a disgusting kebab. But the hotel room does have a bath, which is a life-saver after a long day in the saddle!

So ends what I hope will be the hardest day's riding of my cycling career...