Having just cycled nearly a 1,000 miles from Birmingham down to the South of France, and enjoyed a few days off in St-Remy-de-Provence, I decided to get back onto the bike to tackle another challenge - riding up Mont Ventoux. It's one of the most feared mountains on the Tour de France and where where Tommy Simpson died in 1967...

Actually it took no time at all to recover from the journey, and I was starting to feel that cycling 100 miles a day was what I did for a living. But it is very hot down here and I was rather nervous about cycling up Ventoux, which has a reputation for being high (2000 metres/6000 feet), long (15 miles, all up) and hot.

You can see Ventoux (often known as the Windy Mountain, although the original meaning is apparently 'Snow Top') from across Provence to the South. It's very striking, with the top few hundred metres covered in snow in the winter and look like they are in summer, although it's actually a scree of bare rocks above the treeline. 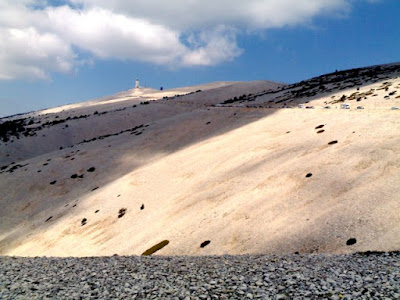 Ventoux's summit looms in the the final miles

Starting in Bédoin (the 'proper' route from the South, not the slightly ‘easier’ one from Sault to the East), the first part of the ride is very pretty through villages and on a lower gradient.

Then the route goes into the woods - the shade is very welcome in the sun and heat, but the gradient increases to 10% and it feels relentless. The second half just keeps going and eventually emerges from the trees towards the barren top.

Along the route today are hundreds of people, eating lunch by their cars and waiting to cheer on friends and family. And there are a lot of people cycling up, most of whom are hard-core cyclists - - it turns out that there's actually a race going on today. 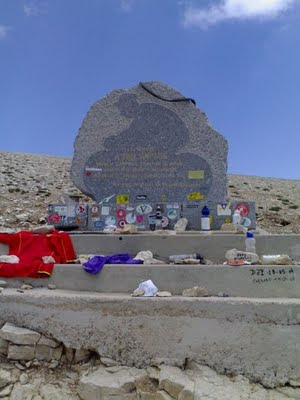 But I make it, going past Simpson's lonely monument which is pitifully close to the top. Going up takes 2 hours 20 minutes (Tour de France riders would do it in half that time, the record is under 56 mins), coming down is a rather easier 35 minutes. That really is it for cycling in France!