Woke at 6 after not much sleep to fields and blue skies rushing past the train. We were given breakfast in the cabin (the beds folded away to create a bench seat) and arrived in Hamburg to grey skies and drizzle, and the train was 40 minutes late.

But we quickly found our route out of the city. Initially it was pretty slow going and we had to stop for showers - and my traditional first-day puncture - but things picked up outside Hamburg and we made good progress through the very flat countryside. The local village architecture was barn-like with horses head details on the gable ends, rather as you would imagine an Anglo-Saxon long house (well, they did come from around here, so it makes sense!). 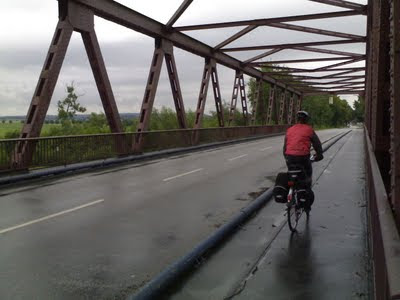 Heading out of Hamburg

There seemed to be cycle routes everywhere, although the Germans seemed very unhappy if you didn't use them (for example, if they were covered in glass, horse shit, very wet or kept switching sides of the road). The countryside itself was very beautiful, and virtually pancake flat, with open grassland and woodland, dotted with bird hides.

Despite the progress we didn't manage to have lunch until 3.15, only halfway through the 100 miles we needed to do, which we did at a little restaurant in the sun. Just as we finished a storm blew up very quickly and we had to wait 30 minutes under a barn as torrential rain and lightning surrounded us. After the storm in the Elbe valley

We raced on as the roads dried and made very good progress, although the last 15 miles seemed to take forever, and we arrived, shattered, in Wittenberge at 8.20pm.

After showering and cleaning our clothes we walked into the town and realised that we had arrived into (former) East Germany without realising - there was only one restaurant in the whole town and nothing else open! But it was a good meal and we walked back to the hotel for a much needed rest.