Went to bed with a very sore hip (very painful for walking and standing, but doesn't hurt at all on the bike for some reason), but woke up feeling fine.

Storms forecast today, but it started sunny and we cycled around the Bodensee through Lindau and across the Austrian border to Bregenz in the shadow of the mountains. Like Steve McQueen in the The Great Escape, we were able to see Switzerland in the distance, if only we could reach it... 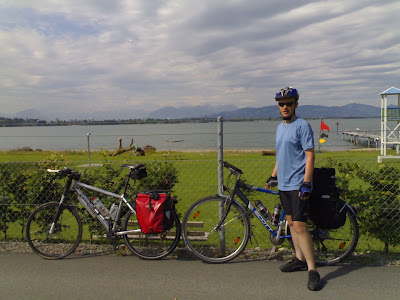 Bodensee - Switzerland is in the background

We found the lakeside cycle path and continued alongside the lake and over the 'old' and 'new' Rhine. Only in Austria for an hour before we crossed into Switzerland, and we travelled through Rorschach and Arbon before heading inland into the countryside.

Turned grey, but didn't rain until 1pm, when we arrived for lunch at the Schloss in Hagenswill, the village where James's other half Erika went to school. The castle has a moat with huge carp in it and we had fantastic sausage and chips with gravy for lunch. We continued on to the hamlet where Erika grew up on her father's cheese factory and through Bishofszell where we picked up the cycle route towards James's village of Grafstal.

With 15 miles still to go the rain started bucketing down and, after waiting in vain for it to stop, we decided to carry on - well, you can only get so wet. The longer route earlier and not being able to take shortcuts through the woods in the rain meant a longer day, but we finished the ride feeling remarkably fresh - to be honest I would have been perfectly happy to carry on cycling the next day...