We had a good night's sleep and a German breakfast of rolls, meats and cheese, with coffee, eggs and yoghurt (although we would have eaten anything). Got on the bikes rather tentatively after a long day in the saddle, but both felt fine (the wonders of rest and Ibuprofen!).

It was pretty obvious that we were cycling through Eastern Germany now - the homes were more much more modest, although perfectly charming, and there seemed to be lots of aging and abandoned industrial works. The countryside was lovely and we cycled over causeways through marshland. The roads were much better than we had heard, although many of the villages had kept their cobbles in their centres, which was charming for 100 metres, but would have been a nightmare for longer distances and would probably have wrecked the bikes. 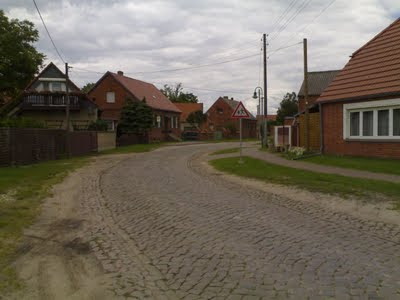 We carried on through woods alongside the Elbe. Just before lunch James noticed that his front tyre was going flat, but we had to find somewhere to eat before fixing it as everywhere seems to shut down on Sunday. We found an empty restaurant to have pork and potatoes for lunch and were able to fix the puncture.

20 miles later James had another puncture, followed by 2 more, all on the same tyre. It was an old tyre that James hadn't got round to changing, with threadbare tread, plus we could only hand pump the tyre, leaving it prone to re-puncture.

Eventually we managed to pump it harder and found the cycle route into Berlin that James had heard about, which headed into the centre past Spandau, whose prison housed ex-Nazis, including Albert Speer and Rudolf Hess.

It was a little winding, but avoided the traffic and we eventually made our way past the Tiergarten to the Brandenberg Gate. We stopped for a beer on Pottsdammer Strasse and found the hotel. Cleaned up, ate and went to bed. 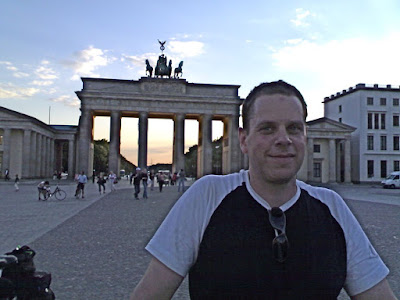 Arriving in Berlin at Brandenburg Gate after puncture marathon