First we had to find a bike shop, get James's tyre changed and buy new inner tubes as we had already patched the others twice. Of course we also found that I had a puncture, so that made it 5 in one day, which must be some sort of record (I had 1 on my trip last year). 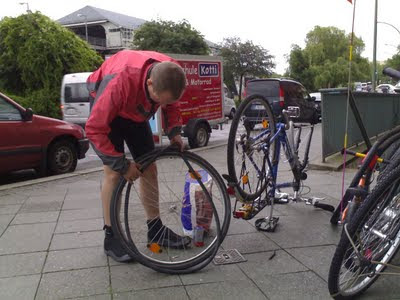 We headed out of the city on patchy cycle routes. But just after we left the city we had to take a track by the side of a dual carriageway which led to an hour-long journey of about 5 miles through cobbled back roads which were being relaid. It was incredibly tiring and dispiriting, and James was savaged by mosquitos when we stopped for a loo break. Eventually we got back onto our route, but we'd only managed 20 miles by 1pm which was another record, for low mileage...

Lunch was a petrol station sandwich by the road, but we were able to find our rhythm in the afternoon. We came across a Soviet war memorial guarded by two Soviet T34 tanks (both obviously recently restored) on plinths in the woods south of Berlin, which was a reminder of how hard the fighting must have been around here, despite its beauty. We managed to out-run a storm and got to Finsterwalde. The town is very quiet and sweet, with a huge central square, and we were booked into a delightful hotel. There was another cyclist staying there who had a bizarre German accent and seemed extremely dull, so James pretended he couldn't speak German, just in case. However that plan backfired when we were accosted by a Macedonian waiter in the restaurant who wanted to practice his English on us.