Started early from Bad Schandau, knowing that it would be a long and hot day. 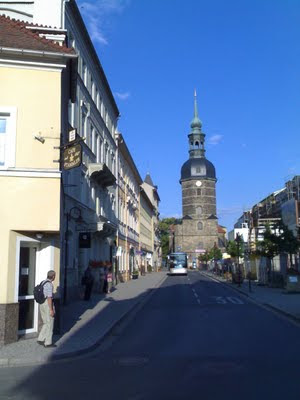 The Protestant Church in Bad Schandau

We continued on the Elbe cycleway and crossed the Czech border, which despite the same landscape was obviously a very different country with a lot less money. Already getting hot, with temperatures over 30 degrees, and we had to cycle over a couple of decent hills before lunch.

The road was increasingly busy after Milnick, but fortunately the route was shorter than we thought. The last 20 miles into Prague were difficult in the heat, but as so often with large cities it is in a bowl of hills so we were able to race down over the rather scary tramlines and cobbles to the Charles Bridge, where we had a well-earned beer, and found the lovely hotel easily.

Nearby was a restaurant which served Czech food (ghoulash and rabbit with dumplings!) - even with our hunger and need for calories we couldn't finish. We walked around Prague which hasn't changed much, apart from being a lot busier, since I was here 10 years ago. There were amazing, shifting clouds of insects by the river, rather like those amazing starling displays you see on Spring Watch. Arriving in Prague after a long, hot day