Hoping for an easier day and although we were lost to start with, we followed a lovely riverside route which kept us out of the wind. We found a bike shop to pump up the tyres, but managed to blow up their track pump and headed off before they discovered it (the mechanic fitted it, so it wasn't really our fault).

Sunny and warm, but not as hot as before. We had to change our route again to avoid the big roads, but made it for a lunch of pasta in Dachau (not an immediately appealing prospect, despite being a pretty town, as it housed the first Nazi concentration camp - they seem to crop up all over Germany).

Going through the countryside, many of the towns and villages had large and elaborate maypoles, which included signs for various trades (I think I can make out a teacher and a baker on this one). It obviously dates back to paganism, and blue and white are the Bavarian colours. British maypoles - with ribbons, morris men and dancing - seem rather meagre in comparison. 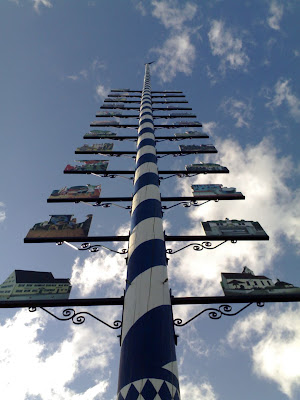 Maypole near Landsberg am Lech

The afternoon was as close to enjoyable as we got on the trip and the hills were much less up and down, and we were getting used to the wind in our faces - cycling without panniers, wind, rain and hills is going to feel extraordinarily easy when we get home.

Made it to Landsberg at 7.20 - a really beautiful medieval town and we'd booked into a sweet 'Bed und Bike' hotel. We discovered later that it (Landsberg, not the B&B we stayed in) was where Hitler was imprisoned - in some comfort - after leading the failed 'Beer Hall' Putsch. Oh, and wrote Mein Kampf.... 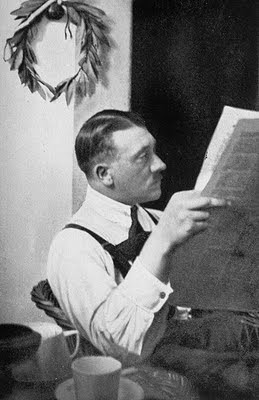