With appalling weather forecast it was no surprise to wake up to grey skies and steady rain on the second day of the ride. But after an hour of hairdryering wet clothes and a classic greasy breakfast a rather larger problem emerged – neither of us could find the key to the padlock we'd attached to the bikes overnight (NB a dispute still simmers on the issue, but - for the record- Gary had the key last).

Despite repeated searches of bags, rooms and outside the key still wasn’t forthcoming, so we borrowed a (blunt) hacksaw from the landlord to attack Gary’s bike lock. But despite everything you might suspect if you’ve had your bike stolen, the saw did little more than polish the lock’s metal.

We were on the point of either calling a locksmith, or heading home, when the landlady miraculously found the key, behind a door on the landing we weren’t aware existed. It was almost too tidy, almost as if they had hidden the key to wind us up - although it was suspiciously close to where Gary unpacked his gear...

Nearly 2 hours late, and with the idea of visiting my granddad's old house long gone, the delay had at least allowed the rain to mostly blow itself out and we headed off to Manchester in cloud, sun and showers. After stopping at a bike shop for me to buy a new inner tube - and to field the usual questions about my 'Lefty' front fork - we reached the city at lunchtime, in a shower of course. We were further slowed down by having to push the bikes through the pedestrianised city centre before rejoining the A6 on the other side.

The next few hours were a pretty unrelenting slog into the headwind through undistinguished suburbs and rain showers. By Bolton, Gary’s speed had dropped so low (about 7mph) that we faced arriving in Morecambe at 10.30pm. However, backbone stiffened by threats, and with a more determined attitude things got back on track, while the road and weather became increasingly pleasant and the traffic lighter. 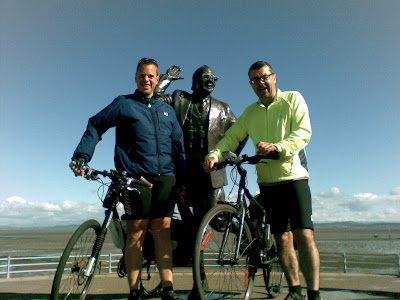 Either I've turned into the Michelin Man, or it's very windy!

After my traditional puncture, and the equally usual underestimation of mileage, we arrived into Morecambe at 8 and met the landlady of the lovely 'boutique' B&B who seemed to have started celebrating our arrival early.

Morecambe itself seems to be stuck in a time-warp, with dodgy pubs and takeaways on the seafront. We found a dismal and empty - although pleasingly quiet - pub for a drink and de-brief. Sadly, and despite us being pretty much the only customers, it was suddenly transformed into an equally dismal and empty retro-disco featuring ZZ Top and Deep Purple on the juke box.

However we weren't so disappointed by excellent fish and chips from a shop run by Asian identical twins - which we devoured happily on the windy sea front before heading home for an early night (with me sleeping on a folding bed, thanks to another booking mix-up).