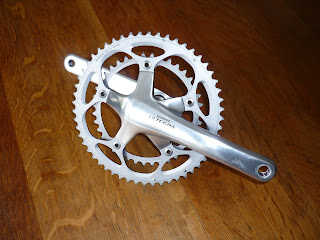 While I'm not planning to tackle a big tour this year, I have agreed with my brother James to cycle the Mont Ventoux Etape du Tour. It's basically a stage of the Tour de France - this year it finishes on the mountain where rider Tommy Simpson died in 1967 (see my French tour blog for details).

I've cycled Ventoux twice before and, I can tell you, it's bloody hard work! However this time, the 15 mile climb to the summit (I think it's an average gradient of 7%, rising to 10%) comes after another 85 miles of riding, so that takes it to a whole new level. We're not doing it on the official date, which is a few days before the Tour stage and has about 9,000 riders on it, instead we're going in September, when it's a bit quieter and cooler.

Anyway, even though I've got a really nice Trek road bike, one thing I've had to change is the chainset (the cogs at the front attached to the the pedal cranks). There is absolutely no way that I can get up Ventoux with the gears provided, and I can't believe that even the Tour de France guys cycle in the mountains on standard ratios.

So, I've sold the old chainset that's done a few hundred miles but is in lovely nick, and bought a brand new 'compact' chainset, which should give me a few more gears - only time will tell...