Beer and bikes don't usually go well together, whatever some people might think.

Now the Dutch have come up with a solution to those wanting to drink and ride, the beer bike. You and 21 bicycle/beer-loving friends can now imbibe whilst touring Amsterdam under your own steam - with the added benefit of burning off some of those beer carbs! 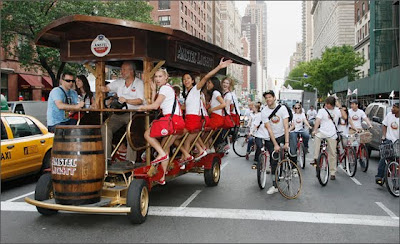 A Beer Bike in action on a visit to New York (Photo: BrandFreak)

Luckily there's a sober driver included in the price, or it could all end in tears - especially with Amsterdam famous for its canals...

Inevitably there have already been complaints about drunken stag and hen do's, as well as reports of three accidents.
at 11:17