Arrived in Bournemouth without too much trouble - well an argument with an officious British Transport Police 'Special' Constable if you must know...

Currently sat in a bar overlooking Boscombe Pier having a beer or 3 - valuable sports nutrition... 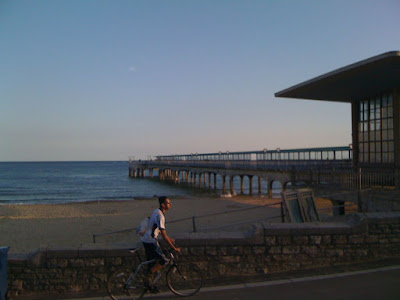 Boscombe undergoing a renaissance as a 'surfer resort' at the moment, with the construction of an artificial reef and the building of funky flats on the seafront. We certainly found a very nice restaurant for dinner.

Gary came as prepared as ever, carrying a D-lock he's not going to use, a massive book that he won't read (and has already decided to leave at the hotel), a variety of sports drinks that he could have bought at any bike shop en route, a large quantity of male grooming products (who is he trying to impress, me?!) and an umbrella!

It's like those Victorian explorers who would take whole libraries and collections of walking sticks with them on expeditions. One even carried a whaling boat across Australia, convinced he was going to find a vast inland sea.

I told Gary about a chap I knew who played a (not very funny) practical joke on someone by putting a brick in their rucksack before the Three Peaks walk. It was only discovered after Shap Fell by the victim, who was in tears with exhaustion by that point.

I'd consider doing the same to Gary if I didn't think he'd already packed enough useless junk...
at 19:45