Heading For The Hills

Lovely ride from Birmingham down to Tetbury in the Cotswolds yesterday to get to a party. Mostly on the flat, but with a pretty sharp hill after Cheltenham and then a rise to the end.

Started v late, 12.30, but shouldn't be too much of a push. First 20 miles on the horrible dual carriageways and narrow A roads you can't avoid leaving Birmingham - I was nearly winged by a Polish car transporter on the long hill down from the M42 to Alcester.

But then it can be prettier - here's Coughton Court a few miles later... 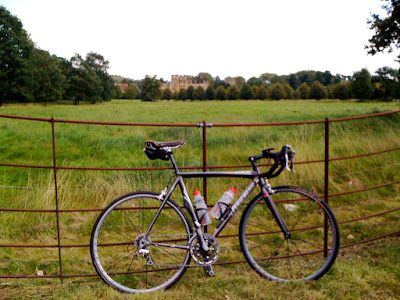 Oh iphone, why do you take such awful pictures?

After 30 miles I'm at Evesham - at least the A46 dual carriageway here has a nice wide shoulder that doesn't seem to be covered in broken glass.

Lunchtime and, praise the lord, the guy in a van from last year is still here - the aptly named 'Franco Pork Bap Oasis', as if there were half a dozen others just down the road (Terry's Sausage Nirvanna, Bob's Bacon Haven?). If you're passing, these are the best pork baps available - and I'm not just saying that because I'm hungry... 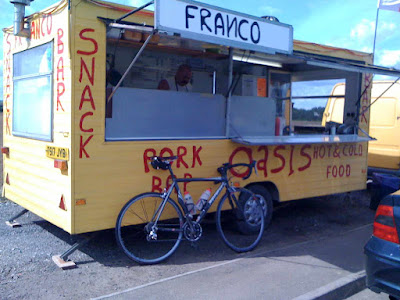 Checking up on the cricket as I go - England are racking up the runs and making Australia sweat. Surely a re-run of 2005, without wishing to jinx things.

Another 15 miles to Cheltenham on the flat, but with a nasty headwind - as there has been all day - it's just worse out on the open flat. Here's a discussion topic, what's worse: headwind, rain, hills or cold? Probably whatever you're experiencing at the time...

After Cheltenham comes a 4-mile hill on the way to Stroud. A pretty low gradient, but I'm in first gear - not good news with Ventoux approaching.

Finally, another hill up to the Cotswolds plateau and into Tetbury to meet the missus and get scrubbed up before a night out 'filling the Glycogen window' as I think elite athletes call it!
at 20:56