Drizzly start to the day and hills out of Wells. Then a clear run to Clevedon (which I'd never heard of) on the way to Bristol. Sadly a shard of glass gives me a puncture in Cheddar and an old chap comments on seeing me fixing my 21st Century bike in the shelter of a 15th Century market cross. Clare drives back from Cheddar Gorge with the pump.

Stop at Clevedon, which has a sweet and gossamer thin Victorian pier jutting out in the Severn estuary. Clevedon means cleft in he hill, and so it proves as the road cuts through the range of hills south of Bristol.

Pretty route through Portishead before heading through Avonmouth, a few mils downstream from Bristol, but a horrible industrial area - and almost impossible to find a cycle route through. Finally disgorged on the other side at the Severn Bridge, which is a terrific sight and has a pedestrian/cycle path separated from the traffic and a lovely view over to its companion bridge as I cross over to Wales. 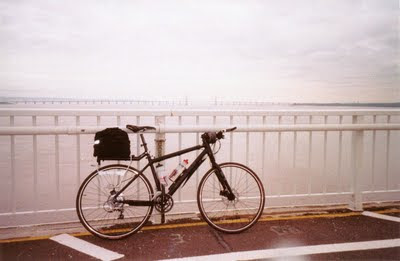 The Severn Bridge with its companion in the distance

Up past Chepstow the hills feel steep, but then there is a fantastic ride down past Tintern Abbey to Monmouth.

Meet a Cross-Penine group of cyclists, also riding to John O'Groats and two of whom are in their sixties. Arrive in Monmouth - I'm staying in a pub which is a bit of a dump, although 'characterful'. Wanted to go out for a wander, but too tired.