I've Gotta Get Me One Of These! 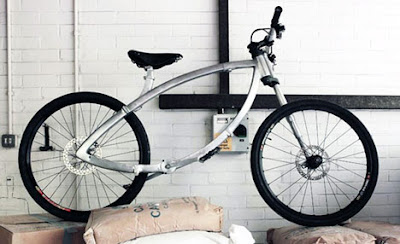 From this... (Photo: Dominic Hargreaves)

I've been meaning to post about this for a while. I'm presuming that, like me, you're thinking 'That's a seriously good looking bike'. And that, in most people's books, would justify buying one of Dominic Hargreaves's new 'Contortionist' bikes (and there is only one in existence at the moment, but surely not for long).

But after a few twists, this is what you end up with! 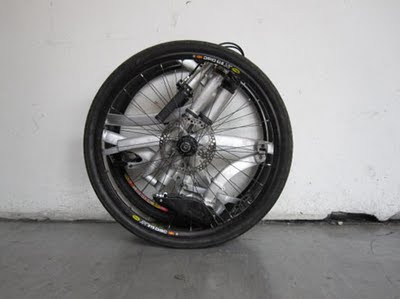 ...to this! (Photo: Dominic Hargreaves)

So you have possibly the best-looking bike around (I especially like the industrial aluminium finish, by the way!), which turns into the smallest 26" wheel folding bike around. You can even pull the bike along on its wheels when folded.

It's the answer to my prayers, I'll never have to tangle with Virgin Trains' ludicrous cycle-booking scheme again. No getting your bike nicked. Surely Brompton will be out of business in a week - I mean, who wants to ride around on one of these? 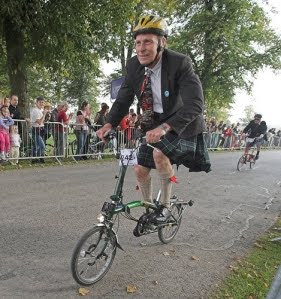 The bike was created by 24-year-old Hargreaves for his final MA show at the Royal College of Art in London. And he's been shortlisted for a £10,000 James Dyson Award as a result. According to the Guardian there are at least three firms interested in producing the bike already. "They're car firms. I can't say which, but they're all German," he told the Guardian.

Hargreaves reckons the bike could be produced for about £400: "There's no reason why not. There's nothing on the bike that couldn't be mass produced in a bike factory."

I'll believe that when I see it. But I love the fact that both the front and rear wheels are attached to the frame on one side only. Nothing new there, Cannondale have been doing it for years - for front forks at least - just look at the Lefty on my mountain bike.

One other oddity: you may notice that the bike has no chain or gears. He hasn't got round to that yet, but Hargreaves reckons it can be driven by some sort of hydraulic trickery - interested to see that working commercially - a belt drive might do too. (You may also notice that the left crank and pedal is missing on the video, apparently Dominic mislaid a bolt just before filming!).

I also wonder whether there's enough rigidity in the frame without a seat tube, plus the wheels are off-set, which Hargreaves reckons doesn't affect the ride quality (and you have to trust the opinion of a 24-year-old who owns 14 bikes).

I love the fact that practicality and alternative transport can also be beautiful and techy. I can't wait to get one!

Anyway, here's a demo of the bike in action: