Made it in one piece, just about...

The afternoon, which we knew had two hills as large as Beachy Head - and in which we still have 50 miles to cover - was always going to be tough.

First up was Hastings and it's not-quite-so-run-down twin of St Leonards-on-Sea. Another whopping hill out of the town, although perhaps we are starting to get used to these. At least it means you get to go down again and we roll downhill to Winchelsea and Rye, which are an altogether better class of place. Rye was left landlocked when the sea retreated two miles, which has also created the Romney Marshes - so no hills for at least 10 miles! Time for an ice cream, I think...

For the last 20 miles of the day the route hugs the coast, mostly on the flat. Sadly Gary is starting to experience some nasty saddle-sores, so not much fun for him and he's riding out of the seat half the time. And we know that there's one last hill around Folkestone to contend with.

We're not helped by signs which give no hint of our route, but finally find the hill and it certainly lives up to its billing - 530 feet and probably 12% gradient. I find these hills strangely exhilarating, especially as I need as much practice on hills as possible before the autumn, but Gary is just keen to finish.

Which we do shortly afterwards, coasting down into Dover over the last 5 miles.

It's the end of our journey and here's what makes it all worthwhile... 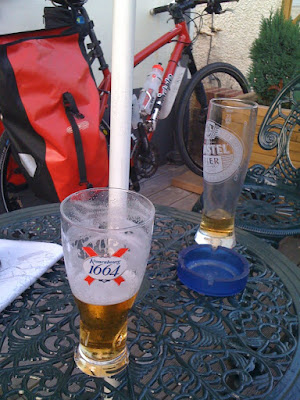 A couple of (you have to admit) well-earned pints and then we walk the last 100 yards to the B&B, tidy up and eat a Chinese takeaway on the wall of a car park - ah, the glamour of it all!

No early start tomorrow, or tens of miles to cycle - we should sleep like babies.
at 21:32