Bad news for American cyclists? There's a campaign in the rural US Midwest state of Iowa to ban bicycles on 'farm to market' roads (ie most Iowan roads, I'd imagine). 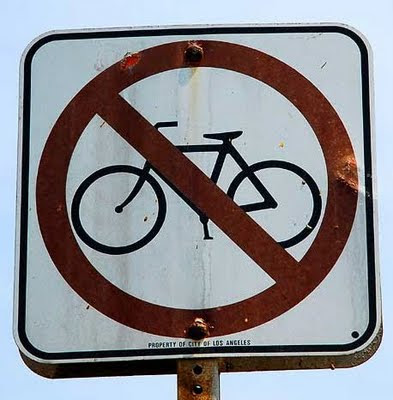 Sounds nuts, but I've read some worrying stuff about the way cyclists can be treated in the States - Mark Beaumont was knocked off his bike and mugged ON THE SAME DAY in Louisiana on his round-the-world trip, and Jane Tomlinson had beer bottles thrown at her during her coast-to-coast cancer charity ride.

I'm hoping to ride the US coast-to-coast when I have some time (maybe for my 50th?), but it's a worry.

I love the US - we drove from San Francisco to New York for our honeymoon - but sometimes, as with Sarah Palin and some of the anti-healthcare reform rhetoric, it's a struggle to understand some people's attitudes...
at 08:06