Congratulations to James Bowthorpe, who finished his round-the-world cycle ride on Saturday at London's Hyde Park in a new World Record time. He completed the 18,000-mile journey in 175 days - 19 less than Mark Beaumont last year. 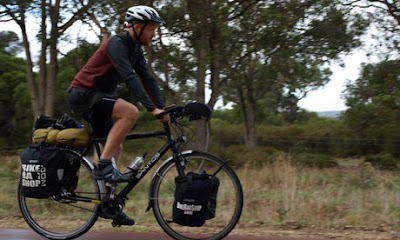 En route to a World Record - James Bowthorpe in Australia

The 31-year-old cabinet maker from London averaged over 100 miles a day (wow!), and had to face an attempted kidnapping in Iran, a bruising encounter with a wombat in Australia, and a sever case of 'Delhi Belly' in India, which saw him lose 20% of his bodyweight.

"I'm a bit tired," an under-stated Bowthorpe, told the Independent. "It's been a long six months and I'm just finally relieved to be here – and glad that the world isn't any bigger because I couldn't have done it."

I've been following James's progress on Twitter, and a nicer man you couldn't wish to find. Well done James - now have a well-earned rest!

James is raising money for Parkinson's research - you can still sponsor him here
at 18:47