I'm a little torn on this one - and absolutely the last person to be throwing stones at fatties, particularly from the well-upholstered glass house in which I currently reside.

But I did enjoy the mild kerfuffle after Russell Crowe was criticised by an Australian paper for his exercise and diet regime of mid-ride fags and tacos. 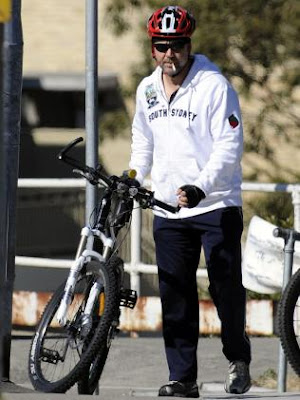 Anyone who saw Crowe in his recent screen role as a roly-poly, scruffy journalist in State of Play would have to admit that the former hunky Gladiator had let things slide rather. But reportedly, thanks to a new fitness regime including cycling, he's lost much of the bulk.

Good on him, we've all been there - weight up and down like the big dipper at Blackpool pleasure beach. And I recall the odd fag break on my 2003 Land's End to John O'Groats tour (knocked those on the head a few years ago, thankfully).

Anyway he rather bridled at the criticism from the Sydney-based Daily Telegraph and challenged the (non-cycling) writer to a bike race. Judge the results for yourself, but I'm not sure quite what the whole thing proves vis a vis Mr Crowe's fitness. Perhaps he should take on a proper cyclist next time and see what happens.

While we're at it, perhaps someone could also give former hunk Val Kilmer the number of a good personal trainer?
at 17:44