Research was released today questioning the safety of cycle lanes. 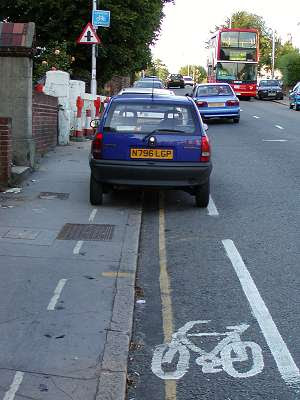 CTC (Cyclists' Touring Club) researchers found that when cyclists ride in designated lanes, drivers give them less room - and therefore put them at more risk. It's similar to findings by Dr Ian Walker that motorists drive closer to cyclists wearing helmets (incidentally, he also experimented wearing a blond wig and found that car drivers gave him more room - a sign that chivalry may not be dead, perhaps?).

Personally I've always found British cycle lanes to be almost always an utter waste of time, creating a false sense of security for cyclists and drivers alike. Which regular cyclist hasn't experienced drivers, particularly bus drivers, ignoring cycle lanes - and the cyclists in them - to undertake, turn left, pull over or do whatever they like?

I've cycled many thousands of miles over many years across the UK - from central London to the Highlands of Scotland - as well as in France, Germany, Switzerland, the Czech Republic and Greece (plus a few hundred yards of Austria). And I would say that the British system is probably the worst, although parts of the US share similar problems.

Let me explain why.

Many European countries - such as Denmark, Holland, Sweden, Switzerland and parts of Germany - see cycling as a natural part of getting about and provide fantastic cycle lanes, separated from traffic. Others - such as France - have an appreciation of cycling and, rely on drivers' courtesy and good sense rather than designated cycle lanes.

Britain provides half-hearted and virtually meaningless cycle lanes (often only a few yards long), ignored by most other road users, many of whom are also discourteous and uncaring about cyclists' safety. The result is that too many cyclists get killed and millions are too afraid to cycle.

Well, that's the million dollar question. Britain's roads aren't suited to cycle lanes, they are too narrow and drivers - most of whom last cycled when they were children - have little understanding of cycling.

My suggestions would be two-fold:

1. The safety of cyclists should become a greater priority in our transport system - that means more, and better, cycling lanes, plus better provision of safe places to store bikes.
2. A greater emphasis on cyclists' safety in driver training - why not get trainee drivers to cycle on busy city streets to appreciate the dangers of bike riding?

Cycling has a big role to play in the future of British transport, as well as preventing climate change, but it will only be taken up if people feel safe.
at 19:13