From Our Swiss Correspondent (Pt. 1)

My brother, Swiss James, has been living in Zurich for the last 9 years, where he does a fair bit of cycling. Feeling left out, he's decided to contribute to the blog...

Since Matthew and I had been planning to ride the Ventoux stage of the Tour de France this autumn (now postponed until spring 2010) - 100 miles with a climb of 4,000+ metres - it seemed a sensible idea to tackle a 70 mile ride with 2,000 metres of climbing last weekend.

But it just went to prove that I (we) would never have got up Ventoux - maybe to Bedoin, but not further. 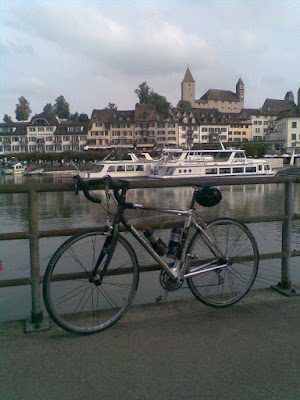 The aim was to ride from home, north east of Zurich, over the Klausenpass as far as Linthal. The mountain is the same height as Ventoux, but - at an average gradient of 6% - less steep. If I can't do this comfortably, then Ventoux is a non-starter.

Saturday, September 12th
9.00am - Must be a record early start for me. It was supposed to be 8.00, but that’s asking too much at the weekend. The first 20 miles are mostly flat, heading south through the canton of Zurich. Legs feel terribly heavy. Not sure if this was such a good idea.

9.30am - Warmed up a bit now and settled at an easy 15mph. Trying not to make my usual mistake of setting off too fast.

10.30am - Reached Rapperswil at the southern end of Lake of Zurich. It’s a pretty town, worth a visit. If the weather’s nice, try a lake cruise from Zurich. Consumed first Mars bar of the day, for an extra boost up the impending hills. Feeling quite confident at the moment.

10.45am - Crossed over the causeway, through Pfäffikon in Canton Schwyz and started my first climb of the day. The cycle path is fantastic - even though it’s a busy road, cycles are allocated a 2m wide strip at the side, so I feel quite secure. I prefer this to a dedicated cycle path which is shared with pedestrians/prams/dogs/children, as I am generally going quite a bit faster than them. At one point, they’ve even built a separate tunnel for pedestrians. Neat.

11:00am - Reached the top of the hills and now crossing the moorland which separates Lake Zurich from central Switzerland. The road here is pretty narrow, but Swiss drivers are mostly very courteous towards cyclists. And most cyclists also behave sensibly too, so it’s give and take.

11.45am - It’s a long descent down to Schwyz, which is a nice reward for the earlier climb. I'm making good progress, but the weather’s not brightening up – the mountains are wreathed in cloud and mist. I should have brought my long-sleeved jersey, as I’m starting to feel chilly. So it’s on with the rain jacket for now.

12.30pm - Passed through Schwyz and really in central Switzerland now. 45 miles on the clock, so I stop for an early lunch at a local restaurant in Brunnen, close to Lake Lucerne. Take the daily special – broccoli soup followed by chicken with risotto and curry sauce. It’s nothing special, but I’m surprised how hungry I am. Drink half a litre of Rivella, Switzerland’s favourite sports drink, which is actually made of milk serum (whey), a by-product of cheese-making! It’s one of those products -like Marmite - that people either love or hate.

1.00pm - On my way again, arriving at the Lake Lucerne which is surrounded by mountains, none of which are visible in the mist. 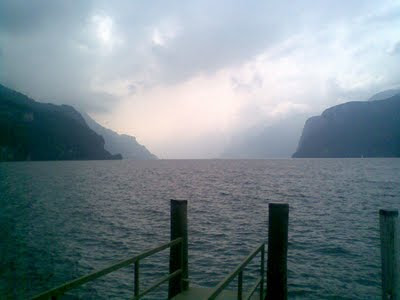 1.15pm - I’m on the busy road which threads it’s way alongside the lake at the base of steep cliffs. This is one of the main North-South axes towards the Gotthard Pass and is always busy. There are a few stretches without a cycle path which aren’t very funny, and at some points there are tunnels several hundred metres long, where cyclists follow the dimly-lit pavement alongside the road. This is quite an experience and only for more confident cyclists. Wind is in my face and I’ve not really got back into the rhythm after lunch.

2.00pm - Reached Altdorf, the home town of William Tell - of crossbow and apple fame (interestingly, it wasn't a fairground stunt, he actually shot the apple of his son's head to save their lives). A proper Swiss folk hero, there is a large monument in his honour. Now heading east where the road immediately starts climbing towards my goal – the Klausen Pass. 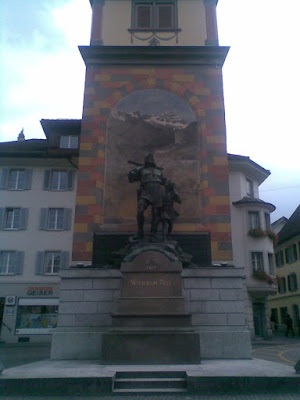 2.30pm - This is harder work than I thought. The road winds through villages, climbing steadily alongside a river. There are a few flatter stretches which gives me a chance to recover, but I’m finding I have to stop briefly every few minutes.

2.45pm - I’ve reached the small village of Spiringen and sit down to eat my last Mars Bar. I was hoping to find a shop where I could stock up on energy-rich food, but there’s no sign of anything. The only cyclists I’ve seen are coming down the hill, and they all look very fit. The first doubts are starting to creep in to my mind.

3.15pm - Find myself descending into the village of Unterschächen, nestled in a small pasture and surrounded by steep mountains. The Klausen Pass itself is completely obscured by cloud. Whilst I’ve covered half the distance from Altdorf to the top of the pass, I discover that I’ve only reached 1000m, so I’ve climbed 600m but still have another 900m still to go. It must be terribly steep from here on. There’s still no shop in sight, so I stop at a restaurant for a Coke, to give me some more energy. 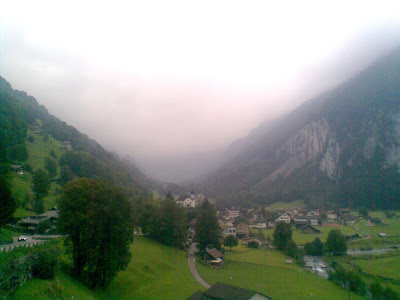 Unterschächen - Nestled in the mountains

3.30pm - Still at the restaurant. Legs have gone completely. I’ve reached my limit - it’s simply too much to get to the top of the pass today. I decide to turn round and head back to Altdorf whilst I still have enough energy to stay upright on the bike.

4.15pm - Back at Altdorf railway station, waiting for a train to take me home. I’ve realised I’ll need to get a lot fitter to have any chance to finish the Etape. It’s not about the distance, but rather being able to do such a big climb like Ventoux without the benefit of fresh legs. At least I’ve covered 70 miles today and done 2200m of climbing, which is still a pretty good effort.