I've Seen The Future And It Cycles

Back from a weekend in Paris and, aside from missing my own bike, I was very impressed by the city's Vélib - a contraction of Vélo (bicycle) and Liberté (freedom) - cycle scheme, which provides 20,000 bikes in over a thousand locations. A Vélib bike in use - Note bikes completely separated from traffic

I have to confess to a little pre-trip scepticism - my last cycling experience in Paris was not a great one, despite the French approach to bikes usually being a very tolerant one. I'd also read some negative stories about the problems the city has had with vandalism and theft, meaning that they have had to replace the entire stock of bikes in the last couple of years (although I quite fancy watching some of the 'Vélib extreme' videos!).

However, judging by my own sense of the number of cyclists on the road, the system appears to be a real success. It was particularly good to see normal people using their bikes for everyday activities. 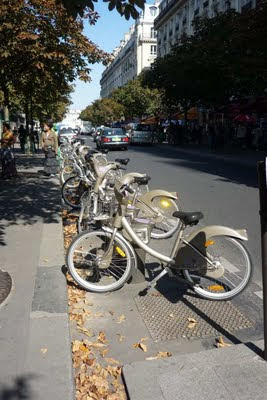 I can't wait to see the Vélib system rolled out in London, although judging by early reports it looks like it will be hitting the usual British stumbling blocks and planning niggles...
at 18:24