Chef, sometime car reviewer and - it turns out - bike hater, James Martin was forced into an humiliating climb-down yesterday after claiming he had intentionally forced a group of cyclists off the road in "sheer terror" during the test drive of a car - ironically the eco-friendly electric Tesla sports car.

In the Mail on Sunday article he described his loathing of 'holier than thou' cyclists who 'dress like Spiderman' and detailed how he had used the car's almost silent engine to creep up on, and then scare, a group of riders. Cue cycling lobby uproar! 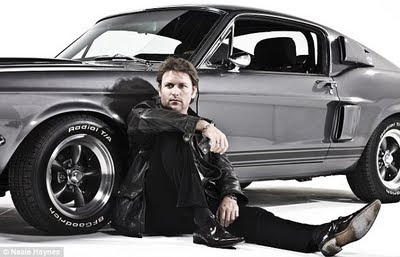 After a barrage of complaints, including Olympic medalist Bradley Wiggins describing him as a 'cock' on Twitter, Martin apologised for 'the offence caused' (not the offence meant, of course) by his comments and the article has also been edited online. Tesla weren't happy to be associated with his comments either.

Reminiscent of when Times columnist Matthew Parris suggested it would be a good idea to start "stringing piano wire across country lanes to decapitate cyclists" - bizarrely for the heinous crime of dropping drink bottles in hedgerows. He also ended up apologised to the cycling community , suggesting that his comments were meant to be 'humourous'. Ho ho...

Rather a storm in a teacup - and thankfully no-one was killed or injured - but I'm always amazed that people feel they can say outrageous things and then simply apologise when there are enough complaints, as if they didn't know any better...
at 08:09