The Long and Winding Road

I think this is going to be the last of my long rides this year. I was running out of daylight by the end and, with a baby on the way, I can't afford to be off gallivanting for the whole day. I'll just have to fit rides in as I can...

That said, it was a beaut of a ride today. It's always surprising that you can start in a city and 5 miles later be gliding down country lanes, and this was a new route to me, even though it's on my doorstep. The main reason being that it's to the East and, like most cyclists I would imagine, I want the wind in my face on the outward journey and it rarely comes from the East.

Got the paper and breakfast at 7.30 so that I could be ready to start early - lovely sunny morning, but with dew on the ground and a slight chill in the air - a glorious blue sky criss-crossed with aircraft contrails, like something from the Battle of Britain. 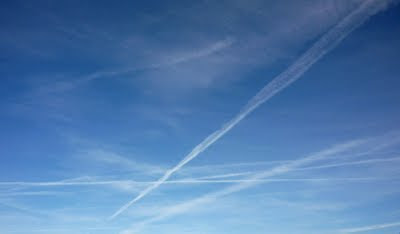 Aeroplane trails in the sky

After riding on the busy road to Solihull I turn off through Catherine De Barnes (a place, not a person!) and Hampton in Arden. I'm sure there are people around here who aren't minted, but I didn't see them. Very pretty lanes, there seem to be lots of oaks around here, and surrounded by fields. All of this amidst a variety of motorways that are barely noticeable.

Next is Meriden, which -as it's name suggests - claims to be the centre of England (apparently the actual centre is a few miles to the North East at Fenny Drayton, although I have no idea how one would work this out and does it change with coastal erosion?). Meriden's other claim to fame is as the original site of the Triumph motorbike factory, now moved to Hinkley.

Up a wooded hill and down under the M6 to Filongley, then on to Nuneaton and Hinkley, whose centres make an unpleasant change to the countryside. But soon enough I'm out the other side and onto a fantastic section of road, first a bypass around Earl Shilton - which has the best cycle route I've ever been on - followed by more cycle paths all the way to Leicester. 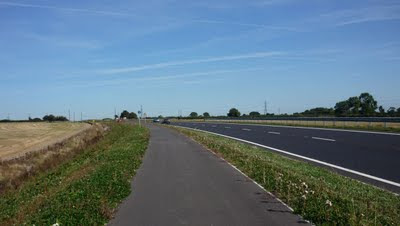 How cycle routes should be...

As it's still early I decide to carry on to Melton Mowbray, first along busy dual carriageways and then another country road. It's a pretty market town and I find Ye Olde Pork Pie Shoppe, the point of my visit. To be honest, I may as well have gone into Greggs next door.

Sadly I have to attest that a pork pie is not the ideal cycling lunch and it sits in my stomach like a cannon ball for most of the afternoon. Setting back, the promised wind appears to be in my face and my legs feel absolutely dead. But soon enough I pick up and it's enjoyable to re-trace my route, counting down the miles and finding the hills less taxing than expected.

Coast through Hampton in Arden in the 'golden hour' with the evening sun coming through the oak leaves - beautiful, a perfect cycling day to end the summer!
at 11:57