Are Women cyclists at more risk than men?

According to the BBC web site, 7 out of 8 people run over by lorries in London this year are women - despite only 28% of cycling journeys being made by females. 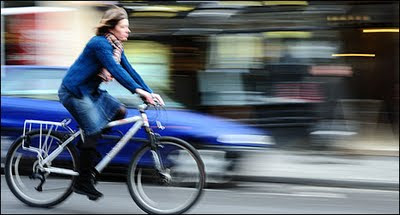 In a 2007 report, Transport for London blamed the fact that women "tend to obey red lights and wait at junctions in the driver's blind spot" and that men are quicker at getting away from the lights - or indeed jump red lights.

Sustainable transport charity Sustrans think it may be due to women lacking confidence on bikes - leading them to cycle too close to the curb, and to drivers not giving them enough space. Others suggest spacial awareness being an issue.

I'm not so sure it divides so cleanly along gender lines, but confidence - as well as assuming that all drivers are idiots who are trying to kill you - is definitely the best way to be safe on a bike.

In fact asserting your right to be on the road, bordering on aggression, is probably the safest bet - even though it's the exact thing that most annoys drivers. Perhaps men are better at that...

Cycle lanes aren't the answer - unless done properly like in France or Switzerland - and helmets and fluorescent clothing can only help to an extent. Driver education must be part of the solution, as is more cyclists being on the road.

But, sadly, being on a bike is dangerous by definition and there's nothing you can do to make it completely risk-free...
at 19:27