Could A T-Shirt Solve My Cycling Road Rage?

I'm sick and tired of having arguments with motorists while out cycling.

'Full and frank exchanges' of 'robust language' have become a sadly regular event on my rides. 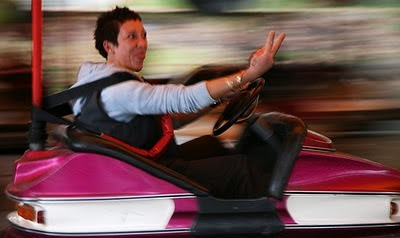 I suppose one answer would be for me simply to stop arguing with rude, selfish motorists. I could meekly keep my head down as drivers knock me off my bike, deliberately block my path, abuse me just for being on the road or act as if I'm invisible.


But I think it's really important that cyclists assert our right to use the road - on equal terms with other road users. We shouldn't have to scuttle along in the gutter, dodging potholes, drains and broken glass.

Don't get me wrong, as a driver myself, I know how easy it is not to see cyclists in traffic, or misjudge relative speeds. And I also know that some cyclists can be aggressive and ignore the rules of the road, but that can't be an excuse for the minority of motorists who seem to think cyclists should be driven off the road - literally in some cases.

But I might have found an answer - a set of t-shirts created by professional cyclist Phil Gaimon, available at his web site. 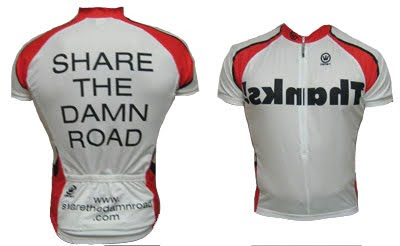 Say it with clothing... (Photo: sharethedamnroad.com)

According to the site, Phil was tired of being "honked at, buzzed, and cussed out while he trained, and frustrated that the speed of motor vehicles made witty and insulting replies impossible. To solve that problem, he set out to create a line of jerseys that express what he's always wanted to say to passing cars."

The t-shirt messages include 'Share The Damn Road', 'Don't Honk At Me', 'Slow Down' and 'Don't Run Me Over'.

So perhaps some of the worst motorists who make cyclists' lives a misery might finally get the message...
at 21:56