After a lot of thought, and bank account checking, I've finally taken the plunge and bought myself a new bike.

Why on earth would I need that, you may well ask, isn't the side passage of our house already cluttered enough with bicycles? You can only ride one at a time, after all. 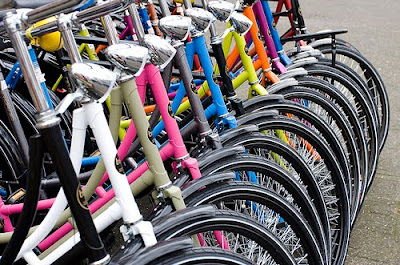 How many bikes does one man really need...? (Photo: Flickr User Ms. Abitibi)


As previously detailed, I've currently got three bikes - a racer, a Cannondale mountain bike (see top photo) and a scrap bike I go to the shops on.

But as well as the usual weekly cycling, I've been riding longer tours since 2003 (details above) - including an 800-mile tour from Birmingham to Zurich this summer. And all that time I've been using pretty unsuitable mountain bikes for the purpose. So I decided that I either needed to sort out my current mountain bike or bike a specific tourer.

My current Cannondale is great, but the suspension fork means that I spend half of my energy when going uphill bouncing up and down. The disc brakes are fantastic, but they're designed for off-road, not long mountain descents with panniers, the posture's all wrong, there are no mudguards (which means getting far more wet than necessary) and there's no way of attaching front panniers (so no longer tours or camping).

To put some of these problems right would probably cost about £500, which isn't isn't worth it on a 6-year-old bike.

So here's the solution - a Cannondale Touring Ultra: 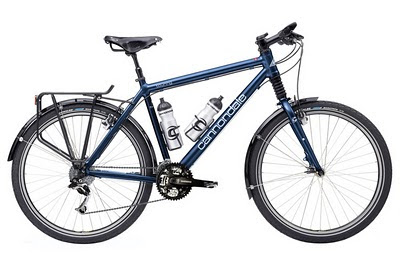 So what do we have here?

As you can see, I've gone for a bike based on mountain bike components, rather than a road bike as it's more rugged and I prefer the more upright position. There are all the right bosses and holes for attaching front and rear panniers, plus mudguards. It has ergonomic handle bar grips for comfort and the front suspension can be turned off when going uphill. Plus it comes with a fantastic quality Tubus rear pannier, a Brooks B17 leather saddle, Magura hydraulic rim brakes and Schwalbe puncture-proof tyres. Full spec here.

The frame even comes with a lifetime warranty!

Admittedly it's not the 'sexiest' bike you'll ever see - and my existing Cannondale's Lefty fork is certainly a good way of breaking the ice. But this new bike is actually designed for touring and should be able to cope with anything I can throw at it for years to come. In fact, it would be perfect for my ultimate goal of cycling America coast-to-coast.

I looked at a number of specialist touring bikes, including the Santos Travel Master and Thorn Raven. They're great bikes, with amazing reputations, but I've ridden Cannondales for years (my last 3 mountain bikes have been Cannondales), their first bike was even a tourer back in 1983 and the reviews I've seen are excellent. I just click with them.

And while I would have loved to have bought a bike with Rohloff hub gears I know that, for me, it's an expensive solution (£700!) to a problem I've never had - after thousands and thousands of tough miles I've not once (touch wood!) had a problem with a derailleur gear. Admittedly they need looking after and adjusting, but that's half the fun!

Anyhow, I'm off to pick the new bike up from London tomorrow (fingers crossed I can get a bike space on the train home!). Then the current mountain bike will need a service and some new photos and it's off to ebay. I feel ungrateful after the good times we've had together.

There will be a few more things joining it on sale to pay for the new bike - my Linn turntable, Spanish guitar, Micromega CD player and SLR camera for a start. 'Drachenfutter' as the Germans would say (literally 'dragon fodder' - the peace offerings made by guilty husbands to their wives)...

I will give the new bike a review once I've had the chance to get some miles under its belt. And I'll need to do that in preparation for this summer's ride to Switzerland.
at 18:48