Question: What do David Walliams, Davina McCall, Lawrence Dallaglio and Fearne Cotton have in common?

Answer: They're all cycling hundreds of miles for charity. 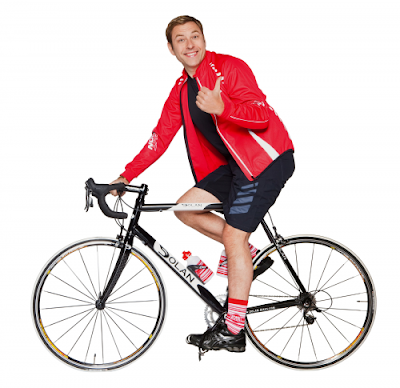 David Walliams - on his bike

While David Walliams - following on from his cross-Channel swim - has brought together a team of celebs to cycle from Land's End to John O'Groats (well, John O'Groats to Land's End) for Sport Relief, Lawrence Dallaglio is doing likewise with an 1,800-mile ride from Italy to Scotland to raise a million pounds for charity. A million quid seems to be the going rate these days...


James Cracknell and Rebecca Romero tried (and failed, unsurprisingly) to cycle from Land's End to John O'Groats on a tandem in 48 hours last summer.

Back in 2008 Adrian Chiles and Alan Shearer cycled from Newcastle to London for charity.

It's all admirable stuff, especially at this time of year - I hear the temperature dropped to -15 degrees for Davina McCall the other night in Scotland.

I was discussing why there might be such a glut of celebrity charity cyclists at the moment with a friend the other day, and the best answers I could come with are that:

1. Cycling seems to be very of the moment - it's clean, green and becoming increasingly practical in modern cities;

I think it's all absolutely admirable - although the fact that David Walliams's Land's End team are doing the riding in shifts does seem a teensy bit of a cheat, even if they are going against the prevailing wind - just as long as it doesn't detract from the national press coverage of my own Birmingham to Switzerland sponsored cycle this summer...
at 22:34