I finally caught Rob Penn's cycling documentary on BBC Four last night, after missing it when it was first shown last summer - ironically I was off cycling at the time...

The film - Ride Of My Life: The Story Of The Bicycle - is available to watch on BBC iPlayer for the next few days. 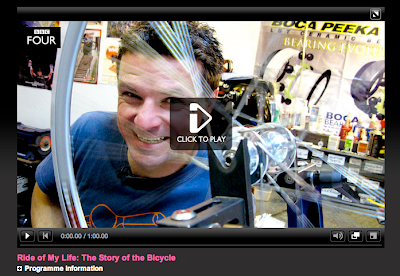 It was really two documentaries squashed into one.  The first was the potted history of the bicycle - dandy horse, penny farthing, dunlop tyres, derailleurs, mountain bikes, etc.  The second (and more revealing) story was Penn's worldwide quest to build his ultimate bike, the latest addition to a coterie of eighteen bicycles, including the remains of the bike on which he cycled round the world in his twenties.

As he pointed out, there was more than a little paradoxical in him creating a huge carbon footprint jetting around the world to build a bike, but he promised to cycle it every day for the rest of his life to make up for it!

The journey took Penn from Stoke-on-Trent to have a hand-built frame measured and made, to Milan for the group set (gears, brakes, cranks, etc), California for the wheels and Smethwick (yes, sunny Smethwick, just 10 miles up the road from me) to watch Brooks make him a saddle in a factory that looks like it hasn't changed in 100 years.

The total bill was around £4,000 - enough to buy a small car - but the result was a beautiful bike, hand built for it's new owner and likely to last a lifetime.


As well as being a fascinating portrait of a cycling obsessive, Penn's film introduced other cycle nuts - from Boris Johnson to the veterans who invented mountain biking by riding their old city bikes down Californian mountains until their brakes smoked.

It was also revealing about the very different philosophies of the British and German, as opposed to American and Italian, manufacturers.  The US and Italian firms (Campagnolo, Cinelli and Chris King) came across as high-handed, secretive and almost cultish - one virtually insisting that staff cycle to work and others refusing to give filming access to the factory floors (despite being given free PR and being paid for the kit in hard cash!).  Meanwhile the English and German firms (Brooks, Brian Rourke and Continental) were easy going and straightforward.

The other good news is that Penn's book, based on the same personal journey - is in my book pile waiting to be read.  I've been saving it as a treat...!
at 23:14