Last of the Summer Rides...

I had one of those beautiful cycle rides this weekend that I'm sure I will re-live during the long, dark, wet Winter evenings ahead... 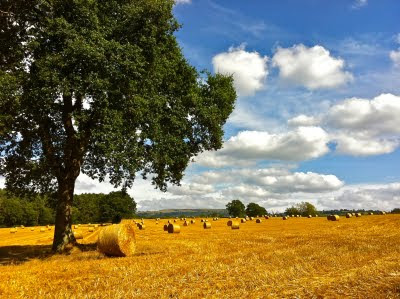 It's hard to get time for proper, long rides with a toddler, but I got special dispensation for an all-dayer as I'll be looking after Oscar for the next couple of weekend's while Clare plays in a concert. So I headed for the hills.


More specifically I rode west from Birmingham along my current favourite route, a 90-mile loop to Tenbury Wells in Shropshire - where my sister-in-law and her family live - up and back over Clee Hill and home. It was a very unpromising morning - wet, cold and drizzly - but I decided to trust the forecast and headed out.

I cycle the first 10 miles of this ride so often - on average 3 times a week - that I could probably do it in my sleep. The advantage of riding familiar routes is that the contours of the roads become second nature, the changes in gradient expected and the distances feel shorter. It's also fascinating to see well-known countryside change through the seasons.

It's an unprepossessing route through the Birmingham suburbs of King's Heath, Stirchley, Cotteridge and Northfield. But then, suddenly you leave the city and climb out, past the Frankley Beeches, into the countryside. The first 10 miles rise gradually to 900 feet at Romsley and then drop down over the following 10 - through pretty Belbroughton (where the rain started in earnest), Hackman's Gate and Blakedown - to Kidderminster.

As I began to dry out, the route then passed the incongruous West Midlands' Safari Park before reaching Bewdley, a picture-perfect (if a little down-at-hill) Georgian town next to the Severn. Crossing Telford's bridge, the road then rises up to Callows Hill and on to Clows Top before another 10-mile descent to Tenbury Wells. I stopped for lunch by the bridge at Tenbury Wells, taking on some much-needed calories before a double assault on Clee Hill. Titterstone Clee Hill - as it is properly called - rises steeply from the market town, climbing 1,000 feet in 5 miles, with gradients reaching (according to my cycle computer) 25%.

It's a glorious ride from the south, especially as the sun was by now shining and the clouds were scudding across the landscape. The views, both on the way up and at the top are spectacular and well worth the perspiration - on a good day (which this was) you can see 20 miles to Malvern, to the South East and 40 miles South West to the Black Mountains in Wales. But the top of the hill itself is still scarred from the quarrying of dolerite stone, which is used for road building.

I decided to add on an extra climb, so without a pause for breathe, I dropped straight down the vertiginous eastern side of the hill towards Ludlow and in less than 10 minutes, I'd undone half and hour's worth of climbing...

On the way back up, the lower fields were dotted with golden straw bales, before the 14% hill led to the wind-swept top, where sheep clung to the steep pock-maked slopes, grazing the common land. Still feeling amazingly fresh, given the 50 miles and 4,500 feet of climbs I headed home via Cleobury Mortimer with the strengthening wind pushing me along through the rolling countryside.

It's been an odd experience over this summer as I've sought out hills to climb, to find that there is as much pleasure in the ascent as in the descent...

Re-joinng my outward route at Callows Hill, the road falls to Bewdley and Kidderminster, before climbing back to Romsley, this time via Clent and Walton Hill and the final ten miles downwards to home.

Definitely a ride to store away in my memory banks over winter...
at 13:47