Ever since our son was born in 2010, I've wanted to get him started on cycling. He's had a trike from Toys R Us for some time, but what I've always wanted was a balance bike - and specifically the Early Rider Classic... 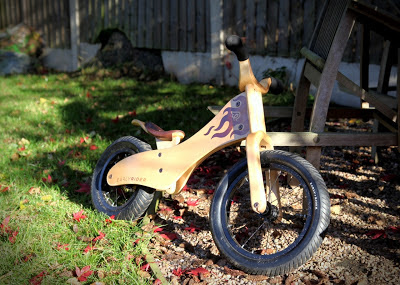 Intro
The basic idea is to get your toddler onto a bike that feels like a bike - and learning to balance - from as young as two years old. Kids can always get their feet in contact with the floor, which is very reassuring for them, so slowing down or correcting a wobble is just a matter of putting their feet down.

It's basically like an old hobby horse or 'bone shaker' which is the origin of modern bicycles.

And what a beauty - it's like a toddler's version of a Harley Davidson! It's even got flames down the side!

I can't tell you the number of comments we get from passers by in the park or on the street, everyone absolutely loves the bike.

Practicalities
The bike is very well made from quality plywood with proper steel wheels and chunky tyres. It's solid, but it's not too heavy - easy enough for a toddler to handle and light enough for a parent to carry.

There are no pedals, brakes, chains, gears or cables so it's simple to look after and keep clean. The seat is adjustable and it's claimed the bike will fit a child from 2 - 4.5 years old, so plenty of life in it.

Riding
Our son is 2-and-a-half and he never really got on with his trike - he tends to stand up and push it rather than ride or pedal. But he 'got' how the Early Rider worked almost immediately and within days he was barreling along at a pace I find hard to keep up with at times.

He tends to 'run' with the bike, with his bottom on the seat supporting his weight and his legs pushing him along in long strides. On the flat he will often have his feet raised for quite some time.

There are two settings on the steering - you can restrict the amount of turn to make it easier for younger riders to stay in a straight line, but our son doesn't like it and steers fine.

One thing it does mean is that I will never have the classic moment when the stabilisers come of the bike and your child pedals unsteadily away for the first time, that's already happened...

Cost
These bikes are expensive - around £100 - but I think you get what you pay for. Not only will this gives years of pleasure, but I suspect it will be worth something when we're finished with it, which is more than you can say for most cheap starter bikes.

But the most important thing is that our son absolutely loves the bike - he wants to ride it every day. And if it encourages a lifelong love for bikes, then that's priceless!

Conclusion
In conclusion, if you have the money and want to give your child a start in cycling, buy an Early Rider!

Here's a video of our son putting the bike through it's paces...