There was no Tour de France in 1944 for understandable reasons - there was a war on - but bicycles did play a little-known role in the liberation of occupied France.

A Channel 4 programme last night, D-Day: As It Happens, marked the 69th anniversary of the Normandy landings by following the events of the day in real time. It was a fascinating piece of television, backed up brilliantly on Twitter. And it revealed that bicycles were one of the secret weapons of the invasion.

One of the seven real-life characters highlighted by the project was Ronald 'Dixie' Dean, a 21-year-old British commando who landed on D-Day at Ouistreham with his trusty BSA bicycle.

D-Day is something I've read plenty about - and I've visited the landing beaches - but I'd not realised the role of bicycles so clearly before.

It seems quaint, but the idea was very simple - bikes would make the troops more mobile after they landed and more able to cover ground quickly before the Germans had an opportunity to counter attack.

I wouldn't suggest for a moment that bicycles were crucial to the Allied success on D-Day, but the programme's Twitter feed does show how they could make a difference at critical moments... 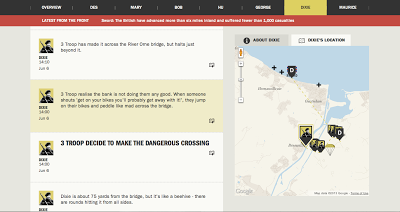 Sadly Dixie Dean was killed on June 6th, 1944 as he advanced inland. It was heart-breaking to see the story develop live on Twitter.

If you want more information, take a look at the Channel 4 site, plus there's fascinating history online online about bikes and World War 2 - for example here, here and here (about the folding airborne version!).

It's a fascinating subject and only reinforces my desire to cycle across Normandy to visit the D-Day sites...
at 19:44