Let's Be Honest, Penny Farthings Belong In A Museum...

I was reading a piece this morning - in, it won't surprise you to hear, The Guardian - about Penny Farthings making a comeback. 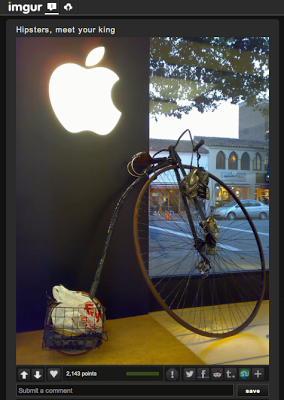 For anyone unfamiliar with history of the bicycle, the 'Penny Farthing' - or 'ordinary' bicycle - was the incarnation of bicycles preceding the modern 'safety' bicycle, which was pioneered in the 1880s in Coventry by John Kemp Starley.

The ordinary bicycle was a huge improvement on the earlier 'velocipedes', which - partly thanks to pneumatic tyres having not been invented - were also known as 'boneshakers' and the equivalent of modern-day 'balance bikes' (beloved of our 3-year-old) with no pedals or gears.

Ironically the Penny Farthing was perfected by James Starley, John Kemp Starley's uncle. His 'Ariel' included innovations such as the first spoked wheel, which were much lighter than existing wheels.

The name 'Penny Farthing' is a pejorative late name given when the bikes were already on their way out. It refers to the large front wheel (a large old English penny) and smaller rear wheel (the smaller farthing).  With the pedals powering the larger front wheels directly, without chain and gears, the only way to increase speed was to increase the size of the wheel.

The huge downside was the danger of sitting high over the centre of gravity of the front wheel with the your legs under the handle bars. If you hit something, you were likely to 'take a header' and be thrown forward off the bike head-first.

The invention of the 'safety bicycle' - the forerunner of the modern bicycle - with equal-sized wheels, chain and gears was a huge step forwards and laid the foundations for the 1880s boom in cycling - and signalled the end of the 'ordinary'.

Let's face it, Penny Farthings are quaint, the equivalent of Chitty Chitty Bang Bang. Seeing someone on an 'ordinary' in the modern world is utterly charming, but my first thought is to fear for their safety.

And invariably these days, the bike will be ridden by a someone in tweed...

To be fair, in 1886 George Pilkington Mills apparently rode from Land's End to John O'Groats in under 6 days on a Penny Farthing, which would be good work on a modern bike (although the record is under 2 days, it took me 14 days in 2003).

And Penny Farthings take part in the wonderful London Nocturne at Smithfield Market...

So, a revival may be over-sold (certainly from a safety point of view), but it's lovely to see these wonderfully imperfect, anachronistic bicycles on the road.

But best to see them where they belong - in a museum. And, I highly recommend a trip to Coventry Transport Museum who have a wonderful bicycle collection, including the 'Ariel' created by James Starley just down the road...
at 20:08