It's less than two years since I last bought and reviewed a set of bike lights, but I've just been sent a new front light to review which has blown me away and made me realise just how much things can change in technology in such a short space of time.

Back in 2011 I bought a Cateye EL-320, which was a pretty much state-of-art LED, producing what seemed a blindingly bright light and and lasting a pretty long time between charges.

What a difference 2 years make... 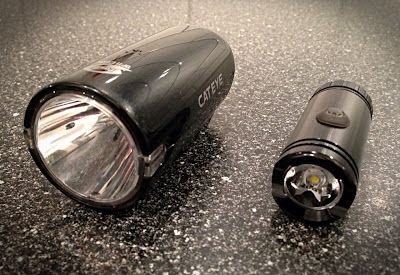 On the left is the Cateye EL-320, all 176g (including the mount) and 100mm x 45mm of it, powered by 4 x AA batteries. On the right is the new Lezyne Micro Drive front light, which weighs 67g (with mount) and 71mm x 26mm, powered by an internal Lithium Ion battery.


That's less than half the weight and probably a quarter of the size!

It's very hard to compare these two lights side by side as they are literally light years apart in pretty much every department, but it seems to be the best way to highlight the quality of the Lezyne.

Build Quality: 10
The Micro Drive is solid and beautifully constructed, made from machined alloy with side cut outs on the front to give some visibility if seen from the side. Compare that to the flimsy, nasty, low-quality plastic of the Cateye, which is much worse than it looks in the picture. Enough said...

Operation & Charging: 10
The Lezyne is simple to use with one button to go through 5 options of solid light: High, Medium or Low; or flashing light: Fast or Slow.

I've seen some people mark the light down because the button is hard to press. In fact, I actually had to look up how to turn the light on! But once you're used to it, that is actually a plus point - on the Cateye, for example, the button is easy to engage by accident and I've found the light completely discharged at the bottom of my bag as a result.

One of the key selling points of the Lezyne is the internal Lithium Ion battery (the highest quality batteries, as used in mobile phones and laptops) which can be charged easily by removing the rear cap and plugging into a USB port - on the side of a laptop or on an iPhone plug socket, for example. It's simplicity itself and helped by the fact that the on/off switch changes colour as the level of charge diminishes, giving plenty of warning. Re-charge time is around 3 hours.

Mounting: 9
The Cateye mount uses a thumb-tightened screw that was solid enough. The main problem is removing the light, using a bizarre side trigger that I have really struggled with.

The Lezyne couldn't be easier, with a mount and rubber strap which easily fixes onto the handlebars (there are two notches to fit road or MTB handlebars). The light itself then simply snaps into or out of the mount.

Burn Time: 9
The various light options on the Lezyne give the following lumens/time:

That's comparable to the quoted burn time of the Cateye for a much smaller and lighter light. So I can't fault it.

Light Quality: 10
It's hard objectively to compare the light from the Lezyne Micro Drive and my existing Cateye EL-320 - partly because Cateye quote brightness as 1,000+ candle power, whereas the Lezyne, while variable, maxes out at 150 lumens.

Sadly there is no way to compare the two on paper as the figures measure different things. Hopefully this picture should give you a clear idea, though... 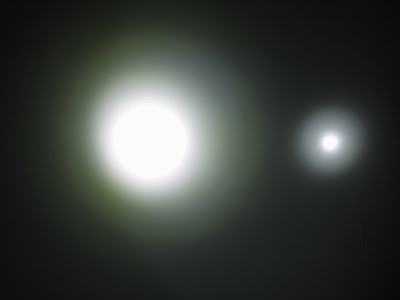 The Lezyne Micro Drive is on the left (cranked up to 150 lumens), the Cateye EL-320 is on the right. To give the Cateye a fair crack of the whip, I actually charged the batteries up specially.

But the results speak for themselves. I've always been happy with the Cateye, but it is feeble in comparison to the Lezyne.

Weight: 10
As I've said, the Micro Drive front light weighs 67g, including the mount. That's over 100g less than Cateye. I'm no weight weenie, but that's a lot!

Price: 9
The Lezyne Micro front light has an RRP of £39.99 from Evans Cycles (who kindly provided this review sample). I've seen the light cheaper elsewhere online, but I'd be happy to buy from Evans for two reasons: first, I've always had good service from my nearest branch in Birmingham in the past and; second, they offer a price match service (both in store and online), so if you find it cheaper elsewhere, they will match the price.

£40 for a front light (or you can buy the front and rear lights together for £70, saving £10) may seem a lot of money, but I wouldn't want to put a price on my own safety and cheap lights are, basically, a waste of money - they just do not do the job.

On the bike: 10
It's not easy testing bike lights this time of year - I had to wait until 10.30pm the other evening and even then it wasn't completely dark!

I tried the Lezyne and the Cateye side by side on my bike out on the road, running the lights together and then one at a time. The results were astonishing, the Lezyne was simply in a different league, both in terms of lighting my way and making me visible. In fact, with the light in flashing mode, if it were much brighter you would be in danger of blinding drivers.

Overall: 10
I have to be honest that I love everything about the Lezyne Micro Drive front light. It's very well made and designed, light, bright, easy to use and charge, easy to mount and remove and won't go off by accident in your bag.

I'll just have to get a rear light to match...!


ps While researching this piece, I checked the Highway Code's 'Rules for Cyclists' about lights and was interested to see what they had to say on the subject:

Rule 60: "At night your cycle MUST have white front and red rear lights lit. It MUST also be fitted with a red rear reflector (and amber pedal reflectors, if manufactured after 1/10/85). White front reflectors and spoke reflectors will also help you to be seen. Flashing lights are permitted but it is recommended that cyclists who are riding in areas without street lighting use a steady front lamp."

First, I'm pleased to see that the rules have changed on flashing lights - it used to be the case (if rarely enforced) that flashing lights were not allowed. This is a sensible change.

Second, the red rear reflector that bikes come with are actually MANDATORY - not just for the retailers, but also for riders. Has anyone ever been prosecuted for this?! In addition, amber pedal reflectors are also REQUIRED. I ride SPD XT pedals and they don't have amber reflectors - are they illegal...?