Bike locks are one of those things - like drains or computer backups - that you only really appreciate when they don't work. 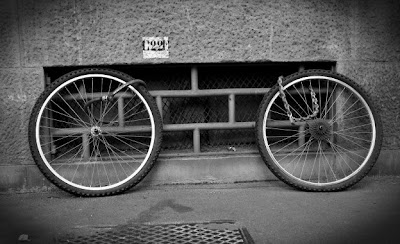 I speak as someone with painful personal experience.

The Cannondale Bad Boy I rode from Land's End to John O'Groats in 2003 was nicked from outside a Sainsbury's in Islington, 10 feet from a security guard...

To be fair, it was locked up with a flimsy (and light) lock. So the anger and confusion I felt as I walked home was mixed with a sense of guilt that I'd let the bike down!

I'm not alone, according to Stolen Bike Statistics over 115,000 bikes were reported stolen in the UK last year. And with only 1 in 5 bike thefts being reported to the police, the actual figure is likely to be nearer 600,000 - more than 1,600 every day! And a depressing 93% of thefts are never resolved.

I learned my lesson and bought a Kryptonite New York D-Lock, drawn by the bullet-proof construction and the guarantee that I'd get £1,200 if my next bike (a Cannondale F800 Lefty) was stolen.

Fast forward a decade and I have the chance to try out a rival to the Kryptonite's crown.

The ABUS Granit 53 'London' D-Lock also comes with a cable to loop through your wheels - absolutely essential if you've ever seen the number of bikes securely-locked with D-Locks, but minus their wheels...

So how do the locks compare?


Security
Both the Kryptonite and the ABUS have Sold Secure Gold Ratings. Sold Secure is an independent organisation administered by the Master Locksmiths Association who claim to be 'the premier testing and certification house for security products'.

I've read stories about lock being easy to pick using things as simple as Bic pens, but I believe that's based on earlier locks, so not something to worry about with these. Obviously a determined criminal with an angle-grinder could probably break these locks eventually, but that's not worth worrying about in everyday use. Road.cc tried to break a Kryptonite lock.

Some people may find Kryptonite's £1,200 anti-theft guarantee reassuring, although it's only free for a year and there have been complaints that it's hard to claim (they require the broken lock to be returned to them, which may not be possible if the thief has taken it with the bike).


Durability
Both locks are solid and secure - made of hardened steel (13mm in the case of the ABUS, 16mm for the Kryptonite). I've had the Kryptonite for 10 years and, aside from some cosmetic marks, it's as good as new.


Weight
The Kryptonite New York is a substantial piece of kit, it feels like a brick on your frame or in your bag. I can't find an official weight, but the lock itself weighs 1.7kg on my scales, plus the bracket. For reference, a brick weighs 2.75kg, so not that much more...

The ABUS Granit 53 comes in at a substantially more svelte 1.3kg, plus cable and bracket.

So, if weight is an issue, the ABUS has a clear advantage.


However, there's no such thing as a light and secure lock, so please bear that in mind...

That's £20 less and it also includes the cable, so that's another clear win for the ABUS.

It's regarded as a rule of thumb that it's worth spending 10-15% of the value of your bike on a good lock. So, on that basis, if you have a bike worth £500 or more, the ABUS or Kryptonite are a worthwhile investment.

Size
The internal area of the lock can make a significant difference to what you can lock to and how much space you have to play with.

The ABUS's internal space is 230mm x 108mm, while the Kryptonite's is 203mm x 102mm. So the ABUS is larger is both dimensions, nearly 20cm in length, which could make it easier to attach your bike to some objects.

The ABUS's Cobra cable is 1240mm long, meaning you can loop through the front wheel to stop an opportunist thief stealing that.


Summary
In summary these are both great locks. Both are strong, secure and durable. The Kryptonite even comes with an anti-theft guarantee.

However, for me, the ABUS pips it on it's cheaper price, inclusion of the cable, lightness and slightly larger internal dimensions

And here's a good guide from Kryptonite on how to lock up your bike securely.

* Full disclosure: the ABUS lock was provided to me for review by Evans Cycles. But I'm very happy to link to them, partly because I've been very happy with their service and they have plenty of branches, but also because they offer a price promise meaning that if you find items for sale cheaper elsewhere, they will match the price.