For anyone who doesn't own a GPS cycle computer I have one piece of advice: buy one immediately!

If you're someone, like I was, used to an old-fashioned 'cycle computer', running by cable or wirelessly from your front wheel, it may be time to wake up and smell the 21st Century cappuccino... 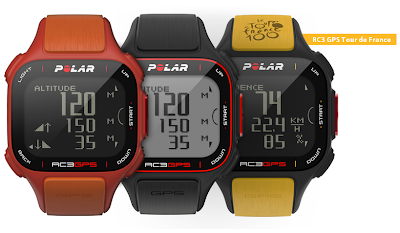 But which to buy? Today I'm looking at one of the latest examples - the Polar RC3 GPS - which promises 'unprecedented training accuracy and insight'. I've also asked my brother-in-law, Huw - a committed and extremely capable triathlete - to test the RC3 and add in his thoughts.

The three colourways available are shown above, but I've been lucky enough to get my hands on the eye-catching limited edition Tour de France 100th anniversary special edition. Lucky me!

Polar invented the wireless heart rate monitor back in the 80s, but this nifty little package combines monitoring your heart rate with a GPS to track your route, speed (current, maximum and average), distance (total, training and lap) and altitude, as well as a detailed breakdown of your level of effort. Once uploaded to Polar's own site or third party sites, such as Strava, it opens up a whole new level of monitoring.

And on top of that, it also promises the services of an expert trainer...

What's in the box? 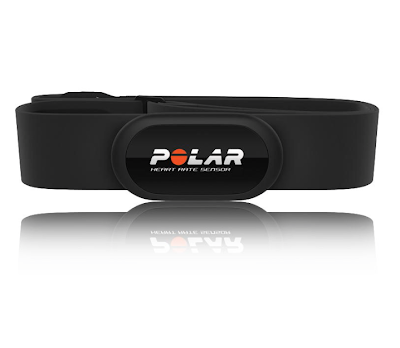 What you get, in a very nice package, is the RC3 'watch', plus a bike mount, a heart rate monitor and strap, plus a cadence sensor to attach to your frame and pedal crank. You can also buy a speed sensor for £35, which is apparently even more accurate than the GPS element and offers additional vital functions (see below for more). Plus there's a comprehensive manual, which is also available online.

Mounting
The RC3 can either go on your wrist or be attached to your bike's handlebars on the provided mount, which attaches quickly and easily. Personally, I prefer to have the watch on the handlebar mount.

The heart rate monitor chest strap is very comfortable and easy to adjust (and washable), plus the cadence sensor is easy to attach.

The peripherals are easy to pair with the RC3 and I found that the GPS acquired its targets quicker than my existing Garmin 500. 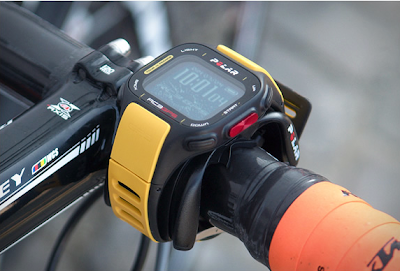 Display
I've seen some critics say that the RC3's display is 'redolent of the 1980s', but I love its look and it's very clear. The screen is legible while riding, either on your wrist or on the handlebars, in light conditions - plus there's a light if you're out in the dark.

There are a number of choices of layout for which details - time, speed, altitude, heart rate, etc - are shown on the screen. While there are plenty of alternatives, I would have preferred to be able to create a bespoke display of the information available to me. And while using the RC3 I did miss some of the additional information fields I have available on my Garmin 500.

Having said that, the RC3's focus on heart rate and training zones is interesting - I do have a slightly obsessive interest in details and it's easy to get distracted by speed, average speed and time while riding, when heart rate is a far better measure of effort and fitness. That's what the Polar RC3 is all about.

In addition, there are huge amounts of data fields 'under the hood' which are fully revealed once the RC3 is synced with Polar's site or Strava. And that is really the time to be looking at that extra data and compare notes. 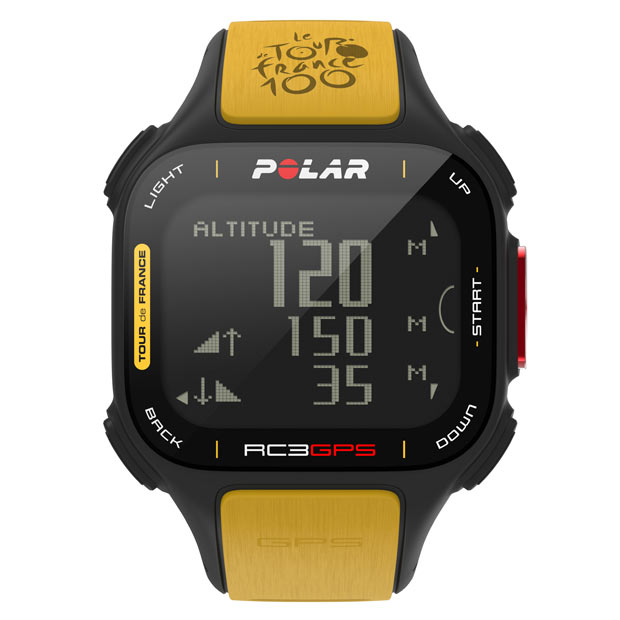 Triathlon Huw's thoughts: "It looks good, with large numbers, yet is small enough to wear as a watch. Different pre-set screen options also cover most information presentation most users could think of and a few more."

Looks and Build Quality
I have to admit that I absolutely love the design of the Polar RC3. So much so that I've been wearing it regularly as a watch off the bike. The great thing is that Polar have managed to squeeze a huge amount into a remarkably slim package that looks like a chunky (in a good way) sports watch.

The build quality is also beautiful. The watch is solid, the plastics good quality and the tooling on the metal switches is absolutely exquisite.

Triathlon Huw's thoughts: "It looks good enough to wear when not exercising, in particular in the ‘look at me’ Tour de France 100th bright yellow version."

Battery Life and Charging
The battery life on the Polar RC3 is excellent, especially in such a small package. Polar quote 12 hours on continuous GPS or 1700 hours without GPS (that's 70 days - or over 2 months - without charging). I'd say that matches my experience so far, similar to my Garmin 500 and should last pretty much any day in the saddle (do you seriously plan to ride for more than 12 hours in a day? I've only done it once in tens of thousands of miles of cycling).

It's simplicity itself to charge the RC3 and there's a really elegant magnetic mini-USB port at the back of the watch with a water-repelling seal. Using a mini-USB adapter means that the charger can be shared with other electrical items, such as iPhones, which is handy when you want to keep gear (and weight) to a minimum.

Triathlon Huw's thoughts: "The battery charging cover and system was simple and effective. As with many GPS watches, battery life is limited."

Score: 9/10 (couldn't really be better given it's size and an elegant solution for charging)

Operation
This is where I have to come to what, for me, is a significant issue with the way the Polar RC3 operates, which is that there is no auto start/stop option, something I've become really used to on my Garmin 500. An auto start-stop basically means that you don't need to manually pause the device when you stop at traffic lights, or hop off the bike to buy a chocolate bar or have a pee.

To me this is something of an oversight by Polar, meaning that you have to remember to start and stop the timer at those crucial moments, which can be a challenge. Having said that, I would think it's something that could be easily addressed with a software update. It can also be resolved by buying the optional speed sensor, which mounts to the front fork and wheel, allowing an autostart/stop function.

I would also say that the interface on the Polar RC3 does take some getting used to. For example, there's one button to start and another ('Back') to stop - wouldn't it be simpler (and more intuitive) to have one 'Start/Stop' button? Having said that, any navigation system becomes easier to use with practise and familiarity.

Triathlon Huw's thoughts: "The heart rate monitor connection worked quickly and simply, but the ‘stop’ button isn't obvious. When running with a group, I couldn’t work out how to stop the watch, when we were re-grouping, so run time was captured as total elapsed time and made the run seem very slow!"

Score: 7/10 (some issues here for both of us, some fixable by buying a speed sensor, some from possible software updates, but more serious work may be needed)

Training
This is one of the areas where the Polar RC3 gets the chance to show its true colours and really shine. As a training partner, this product is absolutely amazing!

As a starting point, the RC3 allows you to establish your VO2 Max. This is a measure of how much oxygen your body is able to get around your bloodstream and is basically a measure of your fitness level.

It's normally something you need to do in a lab, hooked up to thousands of pounds'-worth of equipment. But, using the Polar RC3, it's a process that involves inputting some basic information about your age, height, weight, gender, etc and lying down for 5 minutes to measure your resting heart rate. Even an ex-pro was impressed with the accuracy of the results.

You can upload your training data to www.polarpersonaltrainer.com which can not only track your progress, but even plan out a training routine for you. 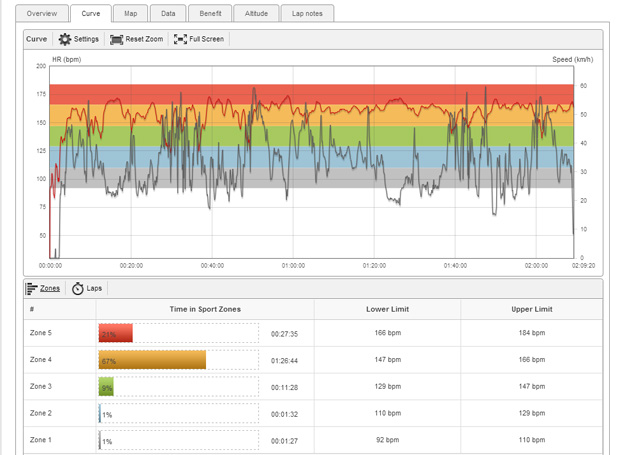 It can feel slightly unnerving, at first, to see your heart rate mapped out like this - especially with the zones marked out in colour - but it can be incredibly informative.

As well as mapping progress, this also allows you to work out where you need to improve. On the bike it can give you not only an incredibly precise measure of how much effort you are putting in, but also what is sustainable for you.

That can be incredibly useful whether you are interested in improving your performance or if you're looking for a way to monitor your peak sustainable pace in a race.

Uploading Details
It's simplicity itself to upload the data from the RC3 to www.polarpersonaltrainer.com - just download the relevant software onto your computer, plug the watch in and press 'Sync'. The Polar site is lovely, but if you want to send the data to a site such as Strava, you can export it as a GPX file.

Score: 8/10 (Polar's site is great, but exporting GPX can be awkward and risks losing some data fields)

Uses - cycling/running/Triathlon
The Polar RC3 is suitable for both running and cycling, and it switches easily between those roles, but there is another issue which will particularly affect triathletes. It's rated as waterproof to IPX7 standards, which means it can sustain moisture at 1 metre deep for up to 30 minutes. That means it will be absolutely perfect to cope with rain showers or puddles, but the watch is not really a serious option for a triathlete as, while most would hope to complete (roughly) a mile in half an hour, it doesn't leave them much leeway.

Price
The Polar RC3, including it's heart rate monitor and cadence sensor has an RRP of £270, although you can pick it up cheaper (especially in the other colourways). An equivalent Garmin 500 has an RRP of around £230.

Overall
Overall the Polar RC3 is a lovely device to use. If you've not used a heart rate monitor before it will be a revelation. And I think the Tour de France 100th edition is absolutely beautiful, so much so that I've been wearing it as my regular watch!

The RC3 would probably best suit a runner who wanted to use it for cycling too, it's certainly very easy to switch from one activity to the other. For dedicated cyclists, such as myself, the Polar RC3 is definitely an option - and a very attractive one - as long as we're prepared to accept some compromises, such as the fact that there's no auto start/stop without the optional speed sensor and that the display isn't completely adaptable.

Triathlon Huw's verdict: "The Polar RC3 is a really nice piece of kit. It looks great, but I found the functions confusing. The charging is simple, but I found the battery life a little disappointing."