I was really pleased to read that a West Midlands Police road safety initiative designed to protect cyclists from car drivers passing them too close is being rolled out across the country.

As someone who's been knocked off my bike a couple of times by drivers and experiences poor driving pretty much every week as a cyclist, I think it's a great idea.

And interestingly the campaign was given some teeth, with 130 drivers pulled over for not leaving enough space when overtaking cyclists.

If you're anything like me, you probably have an aggressive driver shout 'Get off my road, you don't pay Road Tax' at you on a regular basis.

Cycling shop Leisure Lakes Bikes have pulled together 3 reasons why cyclists shouldn't pay Road Tax and I've turned it into an infographic... 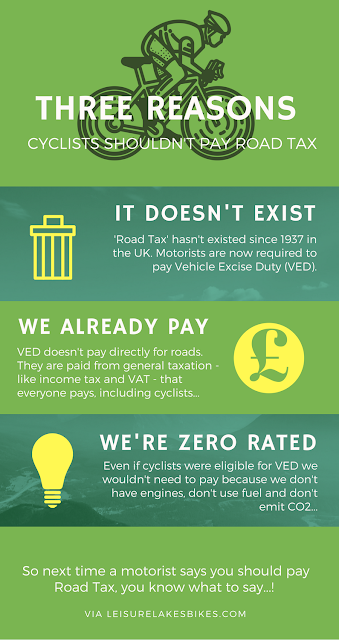