This enterprise was born out of a late-night argument about the relative difficulty of running and cycling – ie cycling being ‘easier’ than running. As a marathon runner, my mate Gary was correct to point out that, over a given distance, running was harder. But perhaps an 'experiment' was the solution...

So the completely arbitrary challenge of cycling to Edinburgh from Birmingham first seriously came up in early 2008. With plans firmed up in April the challenge was on. Not quite round-the-world, but then both of us have mortgages to support.

My original plan of covering the distance in three days was, quite understandably, ruled out by Gary as ‘suicidal’ (good job, given my under-estimation of distances!) and the four-day schedule was agreed and training regimes set and kit bought or dusted off and serviced.

Sadly it became very clear that Gary’s commitment to intensive training, meant that he was going to be seriously under-prepared. But no matter, ‘form is fleeting, but class is permanent’ as they say… 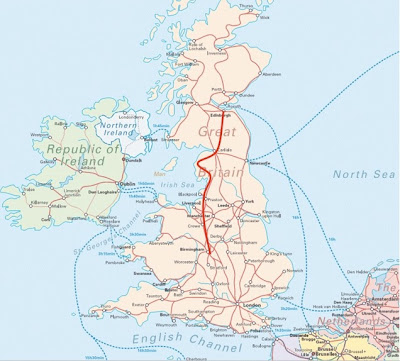 And here are the daily diaries: